From highly acclaimed urban fantasy author, Lisa Edmonds, comes the Alice Worth Box Set. The collection contains books 1 3 and a bonus novella including Heart of Malice, Heart of Fire, Heart of Ice, and Blood Money. Join Alice and help solve the paranormal mystery today!**********HEART OF MALICE (Book 1)The first time Moses Murphys granddaughter killed on his orders, she was six years old.For twenty years, she was a prisoner of an organized crime syndicate, forced to use her magic to make Moses the most powerful and feared man on the East Coast. To escape his cruelty, she faked her own death and started a new life as Alice Worth. As a private investigator specializing in cases involving the supernatural, Alice walks a precarious line between atoning for the sins of her grandfathers cabal and keeping her true identity hidden.Hired to investigate the disappearance of a mysterious object of power, Alice enlists the help of Malcolm, a ghost running from a past as nightmarish as her own. It soon becomes clear the missing object was taken by someone with a dangerous secret and an unknown agenda. When her client is kidnapped, Alice must find her and the object of power before a vengeful killer destroys the city and slaughters thousandsstarting with Alice.**********HEART OF FIRE (Book 2)It has been a rough month for mage private investigator Alice Worth.Alice hasnt had a decent nights sleep in weeks, her relationship with werewolf Sean Maclin is on the rocks, a federal agent hounds her every step, and a powerful vampire whose ulterior motives have ulterior motives watches her every move. Its enough to drive any woman to drink.Just when Alice's ghost sidekick Malcolm is about to stage an intervention, her former employer, Mark Dunlap, enlists her help to find out whos been kidnapping women off the streets. As the list of the missing grows, the citys anger turns against the vampires, and the Vampire Court hir 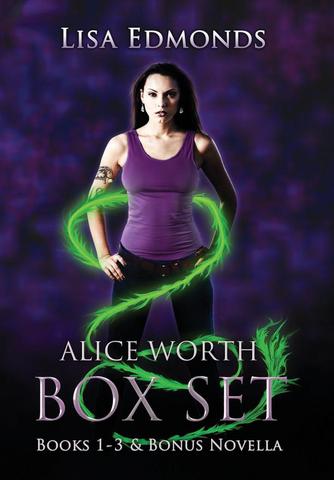